Come and Walk Among Us 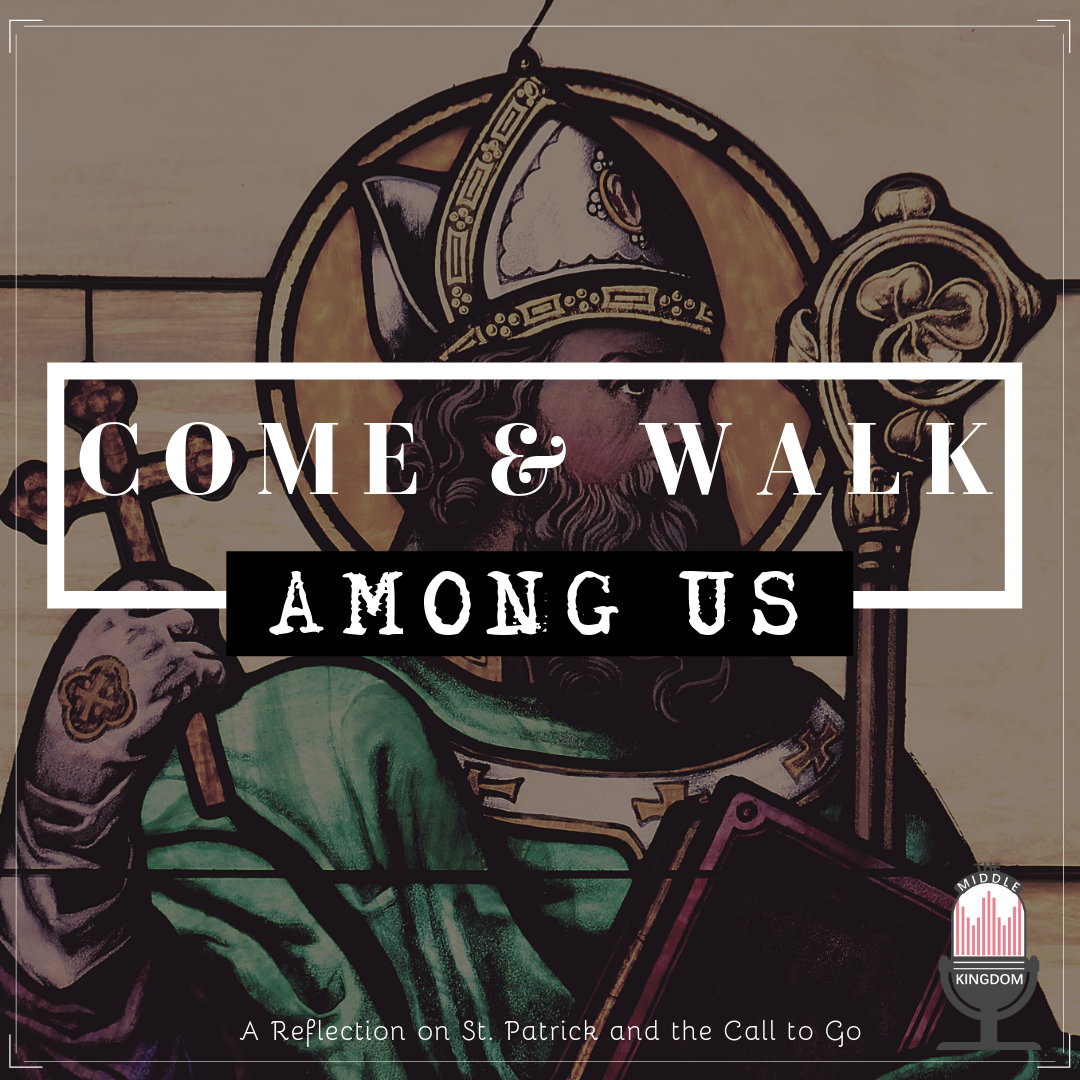 “We appeal to you, holy servant boy, to come and walk among us.”

The story of St. Patrick is astounding to me, but not for the reasons you may think. To be sure, an escaped slave who gets a vision to return to his captors and share forgiveness with them is unfathomable…to an unbeliever. But should it be for us? Did not Jesus teach this kind of forgiveness (seventy times seven if I remember)? Did not the first disciples model this type of forgiveness (Stephen utters the very words of Christ, albeit in a different form – Lord, do not hold this sin against them)? Was this act of forgiveness not the very thing that captured the attention of a pagan culture? They could account for obstinate people not willing to die for their beliefs. But what baffled them was that these same people died gracefully, full of love, willing and ready to forgive the very people who were cruelly taking their lives.

So, it is not Patrick’s deep well of forgiveness that amazes me; he was a Christian and anything less than that would be surprising. C.S. Lewis knew this to be true: “To be a Christian means to forgive the inexcusable, because God has forgiven the inexcusable in you”. Our whole identity is founded upon forgiveness, thus should not the buds of forgiveness bloom from a heart that has embraced forgiveness (Jesus, in Matthew 18, gave us a parable to address the lunacy of the forgiven refusing to forgive). N.T. Wright reflected this truth in saying: “failing to forgive one another isn’t a matter of failing to live up to a new bit of moral teaching”–to fail to forgive means to “cut off the branch we are sitting on”.

Then what is it in the story of Patrick that is astounding to me? Simply put, the long lasting effects of one man’s faithfulness. If we were to look at the effects of Patrick’s ministry just during his lifetime it would be quite impressive. He baptized thousands, ordained priests to lead the new Christian communities; he even shared the gospel with the King’s sons and won them over to the faith. And that’s not even mentioning the miracles that have been attributed to him.

But after his death, after his flames of exertion have been extinguished there are embers glowing; there is action. After Patrick’s death the people whom he had poured into are pouring into others. Eventually these people would carry the gospel to Northumbria (Northern England), East Anglia (Eastern England), Gaul (France), and Italy. Irish influences for Christ can be found in France, Belgium, Germany, Switzerland, Austria and Italy, etc.

By one man carrying the gospel to one place, he inadvertently carried it to dozens of places. Of course, this was no mere accident. Patrick, from the very onset was missional, not only in going but in teaching others to go as well. He writes, “It was most needful that we should spread our nets, so that a great multitude and a throng should be taken for God…Most needful that everywhere there should be clergy to baptize and exhort a people poor and needy, as the Lord in the Gospel warns and teaches, saying: Go ye therefore now, and teach all nations. And again: Go ye therefore into the whole world and preach the Gospel to every creature. And again: This Gospel of the Kingdom shall be preached in the whole world for a testimony to all nations.“

Yet, his influence doesn’t stop at churches planting churches. The churches he founded were not only centers of evangelism but of learning as well. Their monasteries became storehouses for priceless manuscripts and helped preserve God’s word when it was being destroyed in other parts of the world. It’s amazing to think that, indirectly, one man did so much.

Though, I suppose if I were to reflect upon the stories in scripture I wouldn’t be amazed even at this, for I would see that God has always been faithful. God has always used His servants to accomplish movements and not just moments. Moments are good. In fact, movements are only possible because of the moments. And let’s remember, Patrick did not set out to create a movement; he simply wanted to share the gospel with a people who needed it. But that’s the point. When people (the moment) hear the gospel, and receive the gospel, and are changed by the gospel, they turn around and share it with others, who share it with others (the movement). It’s exactly what Paul described in II Tim. 2:1: What you have heard from me…entrust to faithful men who will be able to teach others also.

It’s a grace when we can directly see the work that God is accomplishing in and through us. But that’s not always the case. Many times we don’t see the next chapter in the book. We can’t envision the men and women who will stand on our shoulders and go further than we went, do more than we did. But rest assured, if we are investing in people the way Paul exhorts us to, there will be a harvest (Do not grow weary in doing good). We may not be the reapers of that harvest, but that’s not the point is it (I planted, Apollos watered, but God gave the growth)!

When Patrick first returned home from slavery, after traveling over land, sailing over seas, traveling over land again, trekking through wildernesses and experiencing hunger and isolation, I’m sure he was overjoyed and could have lived the remainder of his life on that beloved soil. Being back among his people, his culture, his language, his family, it was much to overcome. Overcome, strange word, right? But I believe it’s the appropriate one. Comforts and familiarity are a heavy weight to cast off in order to do what God wants you to do. For Patrick it took an actual vision from God in order for him to shake it off.

He writes: I saw a man coming, as it were from Ireland. His name was Victoricus, and he carried many letters, and he gave me one of them. I read the heading: “The Voice of the Irish”. As I began the letter, I imagined in that moment that I heard the voice of those very people who were near the wood of Foclut, which is beside the western sea—and they cried out, as with one voice: “We appeal to you, holy servant boy, to come and walk among us.“

Patrick obeyed God’s leading. In 432 he left his home once again. This time however he was not a slave of the Irish, he was a slave to the Irish. His master was not an Irish raider, but a Redeemer, the Redeemer, Jesus Christ. Patrick walked among them, the church grew, and God was glorified because of his obedience.

We don’t all get grand visions to go to a people as Patrick did. I certainly never did. For most of us it’s a burning in our heart, a desire, a compulsion that can’t be explained, put there not by a dream but rather, a verse, a sermon, a photo, a video, a conviction of the Holy Spirit. Maybe you’ve felt that before. But maybe the weight of your world has tethered you to a geographical location, a certain people, a familiarity, or dare I say it, a weak form of Christianity. When my wife read the book “Radical”, she literally threw it across the room. Why? Because what she was reading wasn’t by definition radical, it was simply being obedient. Too often we’re amazed by things that shouldn’t amaze us (answered prayer, miracles, costly discipleship, “radical” Christian living).

Patrick’s vision compelled him to go, it enabled him to rid himself of his earthly comfort and look to something greater. Through that vision he was able to cut loose his tether. If you need vision, a tool to launch you from ineffectualness, then might I suggest Hebrews 11:13-16:

These all died in faith, not having received the things promised, but having seen them and greeted them from afar, and having acknowledged that they were strangers and exiles on the earth. For people who speak thus make it clear that they are seeking a homeland. If they had been thinking of that land from which they had gone out, they would have had opportunity to return. But as it is, they desire a better country, that is, a heavenly one. Therefore God is not ashamed to be called their God, for he has prepared for them a city.

Is there a people group that is calling out to you: “We appeal to you, holy servant boy, to come and walk among us.” Will you, like Patrick and so many before and after him, be willing to walk among them?