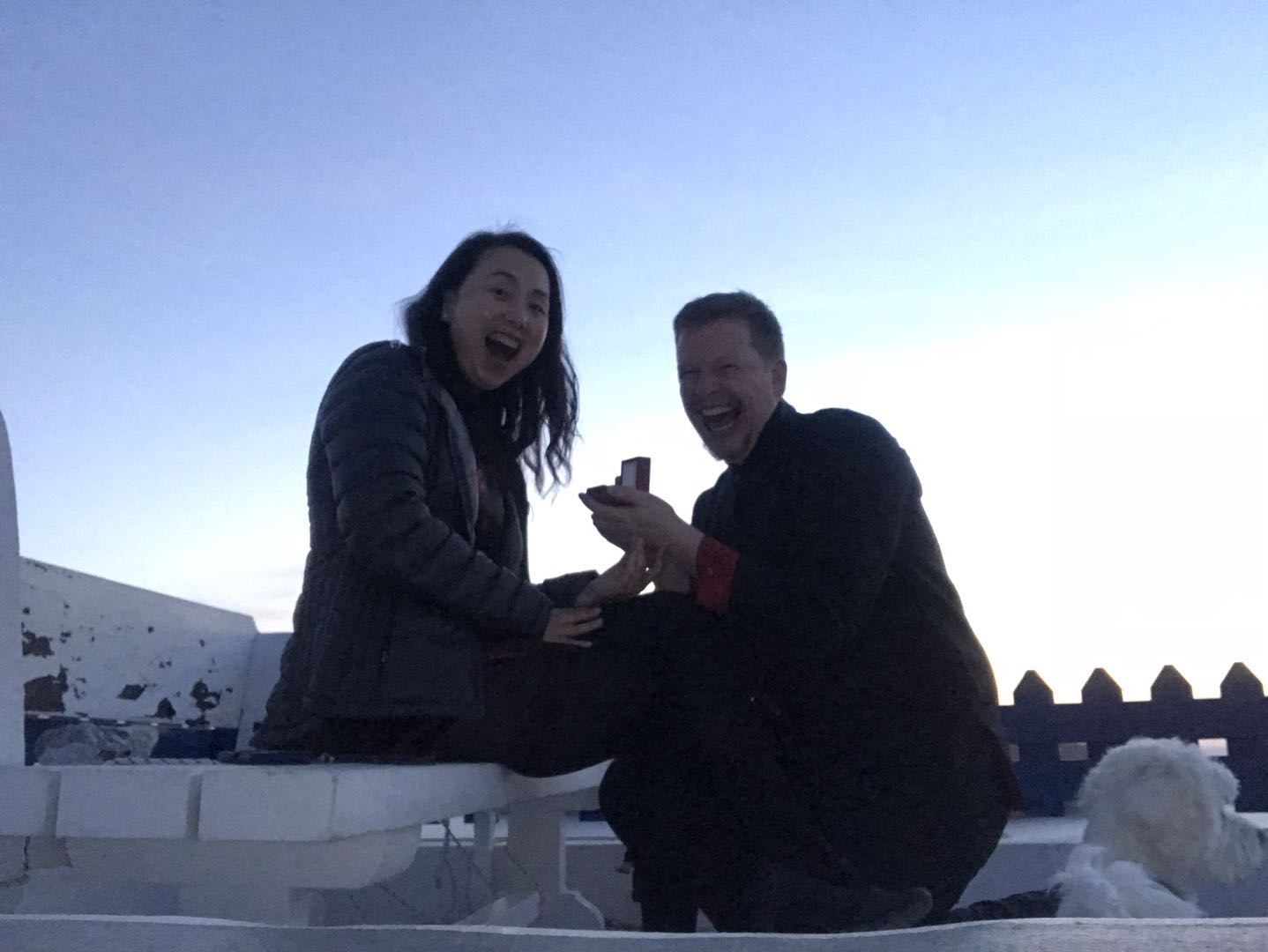 Behind every great couple, there’s a great story. Today, newly weds Brandon and Mimi are joining us to share about how they came together, how they serve God as a couple, and the exciting joys and challenges they have experienced along the way.

First of all, Brandon and Mimi, can you share with us how you met and started dating? How did it all begin?

Mimi: We met through our small group. I have been attending this small group for almost six years and have been actively serving in it. Brandon joined us about two years ago. Since last summer we started to get to know each other more, and I noticed an interest from him.

Honestly, at that time I had not considered the possibility of us getting together. First, I had been single for many years, and pretty much had given up on the prospect of marriage already.

Second, Brandon is younger than me, and I had not dated anyone younger before and was not sure whether it would work out or not.

Third, we came from different cultures and backgrounds and are very different from each other. Fortunately, we had a good talk about these challenges, and at the end we agreed to give it a try by taking it slow while praying about it.

Brandon: At first, I never actually thought of dating Mimi. As she was our small group leader and involved in many church activities, I assumed that such an amazing woman wasn’t single.

It became a time of living a purpose-driven life, intentional and decisive about how I spent my time. During this time. I really noticed Mimi and her servant heart and joy in offering her time, energy and effort to build others up. I prayed that God would remove these desires if they weren’t from Him.

After a while, I received confirmation that He was bringing us together. I prayed for the right timing and the waiting paid off. After discussion one night, she directly asked me if there was something that I wasn’t telling her. I confessed that I had a desire for her that I believed was from God, and that I had been praying for her and direction for a while. She admitted she felt the same, and we continued to pray about it, took things slow, and here we are today, married.

It’s very interesting to see how before dating, you both had your own doubts and concerns. What about throughout the dating period? What were some challenges you encountered? How did you overcome them?

Mimi: I was married once before and got divorced more than ten years ago. Before that I had also been through a really bad relationship. Although over the years God has been comforting and healing me slowly, the scars still go pretty deep. When Brandon and I started dating, I had a lot of fears and anxiety about our relationship. I had to constantly turn to God in prayer to seek His help, comfort and guidance.

Brandon: The wisdom from our regret-filled past allowed us to know the importance of accountability and treating our relationship differently than our previous relationships.

I also have had a rough past with dating. My parents divorced when I was young, and the way they got into relationships wasn’t a very positive influence in my life. Most of my relationships were very selfish-driven and I saw how it wasn’t a blessing to those around.

We wanted to honor the Lord and decided that we wanted a relationship that would bless others and minimize the amount it would take away from the community.

It’s admirable that you were considering the impact of your relationship on those around you. Would you then agree that it is helpful to allow close friends to speak into a relationship? And what were some practical ways you brought community in?

Brandon: I completely agree that it is helpful, with caution. Any advice from others should be confirmed through one’s personal relationship with the Lord.

Mimi: Right from the beginning of our relationship, our small group friends provided a lot of support through prayer and encouragement.

After we got engaged in February this year, Brandon and I started premarital counseling. Coming from very different cultures and backgrounds and having dated only for less than a year, we felt that premarital counseling was critical for us to get to know each other more thoroughly and be equipped with tools to deal with our differences and any conflict that may arise from these differences.

I also sought individual counseling to deal with past hurts and patterns.

It sounds like you were really wise throughout the dating process. Let’s move forward to your decision to get married! What was the decision-making process like?

Mimi: We had agreed right from the beginning that we were not just dating casually, but with marriage in mind. Our dating period was an opportunity for us to get to know each other and find out if we were suitable for each other as a couple. I had a “decision tree” regarding marriage, to sort out what are the “must-haves” and what are the “nice-to-haves” and Brandon met all my “must-haves”.

Brandon: Dating was a way to patiently and wisely prepare for marriage. In the same way that my prayer life and quiet time played a significant role in seeking out someone before we dated, while we were dating I continued to seek confirmation on marriage, which I then received a few months in.

Awesome! So Brandon, can you share with us about how you proposed to Mimi?

Brandon: We planned a trip to Santorini, Greece together for Spring Festival. I planned the proposal for her birthday. That day we started with a hike to Skaros Rock, which was amazing. Afterwards, we went to Oia and came across a lady selling bracelets. I got Mimi one and she still wears it to this day. The shop also had a little bar overlooking the sunset, so we stayed.

Out of my backpack, I whipped out my pre-planned birthday cake, candle, plates and forks. I invited the other guests to join me in singing “Happy Birthday” to her. Then we went up to the rooftop to watch the sunset. It was here that I set up my camera for timed photos, pulled out the ring and proposed!

Greece? How romantic! So after that proposal, you had a wedding to plan! What is it like planning a wedding in China? What practical advice can you share with our readers?

Mimi:. The good thing about planning a wedding in Beijing is that one can hire professional help at a cost-effective price. We were able to outsource the wedding planning, venue decoration, makeup and hair, photography and videography for about half of the price that one would be paying for in the U.S..

The trade-off is that because of the difference between Chinese and US wedding cultures, there are a lot of things that need to be communicated clearly.

It was surprising how expensive wedding venues in Beijing are and how fast they get booked out. It is probably due to the higher real estate and rental prices, and the number of people getting married here.

I got a really nice wedding dress from Taobao for about $30. I would have to pay more for just the fabric in the U.S.! Brandon got a tuxedo tailor-made for about $180, which is still very reasonable.

The wedding planning was a bit stressful for us, but it was a great opportunity to work together as a team. Brandon and I have different organizational and working styles. He is more of a planner, and I am more of an executor. It took us a while to find out how to work together efficiently.

For ex-pats, what do they need to know about the legal procedures of marrying in China? Is it the same as for locals?

We had already put down the deposits for the wedding venue and wedding planning company in Beijing. I felt it was important for us to get married legally before the wedding ceremony and honeymoon, so we flew to Hong Kong and got married there.

Brandon: One thing that couples should know is that banks in China do not currently allow for joint bank accounts. Another thing is that China does have a marriage leave of ten days!

Wow! Some bad news and some good news! So after all the planning, how did the wedding go? Did it go as planned or were there surprises?

Brandon: The wedding, in my opinion, went better than I anticipated. We planned a sunset rooftop wedding but had overcast and constant drizzle. I’m told that rain on a wedding day is good luck. It also brought about a firm leadership decision that I had no intention of making. My family asked if I was going to move the wedding indoors. I boldly stated,

“We are not going to move everything indoors, but out here before God and Man we are getting married. We will pray for the rain to stop, but if God chooses not to stop it, we will be ok”.

We had about 80 guests attend our wedding. I am not sure how traditional it was. We had flower girls, a ring bearer, and a pastoral message. There were no groomsmen or bridesmaids. We had a reception follow the ceremony where there were toasts, photos, and food.

Well it sounds like it was a great ceremony! Finally, what questions should a person ask himself or herself before marrying?

Mimi: The first question one should ask is whether their significant other is genuinely interested in them for who they are.

The second question is whether this person loves God and wants to follow Christ. My faith is the most important part of my beliefs and values, so it is hard to imagine being with someone who does not share that.

The third question is whether this person has good character traits, such as integrity, honesty, humility, compassion to others, and diligence.

Both the second and third questions need to be answered over time through careful observation. The best time to observe is when you two are still just friends, rather than when you are dating.

Brandon: Some questions one would ask before getting married would be:

Am I ready for marriage?

Has our relationship grown enough?

Do we know each other well enough?

Do our parents approve?

Does our Heavenly Father affirm our readiness?

In other words, we are entering deeper into the spiritual battle. Here our relationship will be tested more than ever, and we will be most tempted to give up or lose hope.

Amazing words of wisdom! Well, Brandon and Mimi, thank you so much for sharing and being willing to be vulnerable today. I admire how as a couple, you strive to encourage those around you and I am sure this extended to today’s readers!

Did you know that the Middle Kingdom also has podcasts? To listen to conversations about Scripture and applying our faith, click here.