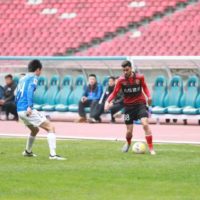 Last week we heard from Wesley and Chloe on homeschooling in Beijing. If you missed that post, you can read it here.

This week Pedro will be sharing on being an athlete in China.

So Pedro, when did you first aspire to be an athlete? Tell us about your career up until this point.

It started when I was 17 years old when I left my home to pursue my dream of being a professional athlete. Since I started playing very young, I aspired to do that for a living.

Football is a very competitive sport in Brazil, and I took a long time doing tryouts to get into a club. I think that I went for more than 10 teams before I got the chance to play for Quissamã FC in 2012. At the end of the season, I knew that I couldn’t stay on the team for the next season. Then I stayed almost a year trying to get into a new club, but I couldn’t so I decided to come to China.

At first, I didn’t want to come to China but after praying about what to do, I felt that I should. I came to live with my sister and then pursued my dream to play again.

After two weeks in China, I got a bad injury that made me stop playing for almost three years. During that time I got a job as a football coach to young kids. That’s something I have been doing until now.

Last year I got the chance to start playing again with a semi-pro team. We did very well in the league, going until the semifinals. This year I’ll be playing again.

What a journey so far! Tell us about your team. Is it mostly Chinese athletes or foreign? What kind of team dynamic do you have?

Most of the players are Chinese as the tournament only allowed three foreigners to go to the games. The name of the league is City Football Super League. It’s a semi-pro tournament. The dynamic of the team is mixed. It’s kind of professional but it also has a friendly and fun atmosphere.

What does a typical day look like? What about a typical season?

As all the players have their own jobs, we have to take care of ourselves during the week to be able to play on the weekends. The season lasts six months

I bet that self-care is a skill that has to be learned quickly. What kind of discipline are athletes required to have? How do you maintain that discipline?

Our discipline is to be always taking care of our bodies, eating good food, training very intensively, and being in a good mental and social mood. We maintain our discipline by focusing on our objectives.

What kinds of sacrifices do athletes have to make?

Which is not easy! I imagine the work environment of a professional athlete is one immersed in secular values. Would you say that Christian athletes have their own kinds of spiritual struggles?

Yes, it is a place of a lot of vanity. We face all kinds of temptations.

Our workplace is an area where we can “be the light” as Jesus commanded. What does evangelism at work look like for a Christian athlete?

We live out the gospel with our lifestyle choices, our discipline, our words, and our attitudes.

And I’m sure the other players take note! Some young people might be interested in pursuing a career in professional athletics but not as an athlete themselves. What are some other career paths within athletics they can consider?

Coaching would be a good one!

What do you imagine yourself doing after retiring from playing?

My future career goals are to play somewhere in Europe. I have been coaching already so maybe this is what I’ll do after retiring, but I’m not sure yet.

Well you still have lots of time! What advice can you offer young aspiring athletes?

I would say to them to never give up on their dreams, even when it seems so difficult to accomplish. And to train as hard as they can.

Takes a lot of faith, I’m sure! Finally, Pedro, how can we pray for professional athletes?

We should pray for them to be strong in their lonely and difficult times, but also in their good times when a lot of them might be distracted by the fame.

Amen! Well, Pedro, thanks so much for sharing today! If you have a question or comment, leave it in the comments section below.